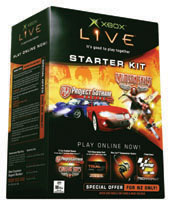 Xbox live is a must for anyone owning an Xbox and a broadband Internet connection. Whether you are into FPS games or racing games etc there are titles out there that have excellent live compatibility to suit your taste. Live works with any Xbox ‘Live Enabled’ game.

The biggest feature of Xbox live is the voice chat, it allows full almost-telephone quality voice chat with every player in the game you are playing online. This is especially great for team based games, example; letting your team mate know there is a guy hiding with a shot gun behind the door he is about to run though.

Xbox live also allows you to setup a ‘friends’ list so you can see when your friends are online and what games they are playing, and you can invite them to play with you (some titles let them know when you have invited them while they are in a game). You can also setup a voice chat ‘room’, and invite your friends in and just have a good old chat.

To summarise, Xbox Live puts the Xbox ahead of any other console, in terms of having a single point of online access, rather than each game developer having their own online feature. It has flawless integration with all Live titles and will continue to get better as they add new and exciting features.

The Xbox pack offered here in New Zealand includes two of the hottest Xbox Live titles out to date. Project Gotham Racing 2 redefines the car arcade-racing genre and really is the finest and most polished computer or console game I have ever played. Crimson Skies – High Road To Revenge is also a stunning title with great online dogfight modes and a good single player story mode.

Xbox Live is an online gaming service that lets you play certain Xbox games over your broadband Internet connection. Gamers use one account and one name with all Xbox Live-enabled games, making it easy to find friends and change games. Communicator lets you trash talk your enemies and strategize with your teammates. The XBL kit includes:
Release date NZ
December 4th, 2003
Game Platform
Publisher
Microsoft
UPC
805529710795
Product ID
1461071