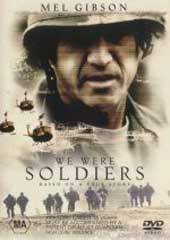 Father… Husband… Brother… No Man Is Just A Soldier.

On Sunday, November 14, 1965 at 10:48 a.m., Lt. Col. Hal Moore and his young troopers touched down at Landing Zone X-Ray in the Ia Drang Valley, a place in Vietnam known as The Valley of Death.

A man of his word, Lt. Col. Moore set foot on the field of battle first only to find himself, and approximately 400 of his men, surrounded by roughly 2000 North Vietnamese soldiers. The ensuing battle was one of the most savage in U.S. history, and the first major encounter between the soldiers of North Vietnam and America.

We Were Soldiers is a tribute to the nobility and uncommon valor of those men under fire. It honors their loyalty to their country and to each other, and it brings to light the heroism and unimaginable sacrifice of men and women both home and abroad.