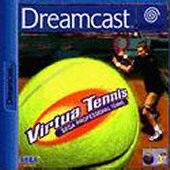 Due to COVID-19, we're unable to accept new orders at this time. Learn more...
Now playing on Center Court -- Virtua Tennis for Sega Dreamcast! This game continues the legend of Sega Sports Arcade titles and is sure to keep the most dedicated tennis fan riveted to the net. A perfect translation of the smash arcade hit, the Dreamcast version serves up the same grand slamming gameplay and rich 3D graphics. Crisp animations and realistic sound effects add to the game's immersive power.

Spectators, ball boys, chair umps, everyone gets into your game and reacts to the scores. Play on realistic courts with surfaces such as clay or grass, and adjust your game as the ball and players respond differently on each. Four-player mode lets you get a fierce game of Doubles going. Eight of the top-ranked players in the world are included in the game, choose one, and volley your way to the Championship.