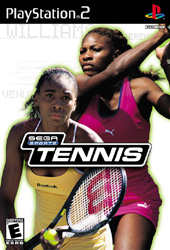 Unavailable
Sorry, this product is not currently available to order
Ace the competition with SEGA Sports Tennis! SEGA Sports Tennis - the acclaimed arcade and Dreamcast‘ franchise, makes its multi-platform debut on the PlayStation 2 computer entertainment system. Choose from 16 internationally ranked men’s and women’s tennis players to compete in singles, doubles, and even mixed doubles matches!

The revamped World Tour Mode lets you create and train your players, sign unique doubles partners, and enter a host of prestigious tournaments. Lob, slice, and smash your way to victory with intuitive pick-up-and-play controls designed to cater to all levels of gamers. Just remember to keep your eye on the ball. SEGA Sports Tennis’ intense four-player action might distract you from noticing the large variety of beautifully rendered stadiums along with the multiple playing surfaces. But who could ignore the new and improved cross-court shots, diving saves, and devastating drop shots? Get ready to break out your racket and keep the ball in the PlayStation 2 court for the most intense tennis action anywhere!