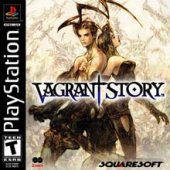 Due to COVID-19, we're unable to accept orders for non-essentials items at this time. Learn more...
Enter the medieval world of Vagrant Story and experience a suspenseful thriller filled with conspiracy, hate, and mystery. Combat is handled in real-time, supported by the Status, Weapon and Chain Craft Systems.

Reviews:
"Not only is the game's story one of the best you'll find in a videogame, but it also rivals many of today's films. The game's goodness doesn't stop there as Vagrant Story is also blessed with a tremendously deep battle system, beautiful in-game graphics, and an engrossing musical soundtrack. Simply put, Vagrant Story is a true work of art and is one of the most cinematic experiences you'll find on PlayStation. It's not only one of this year's best games -- it's one of the greatest of all-time. " - psx.ign.com - 9.6/10

"Let's just get it out of the way - Vagrant Story is a ground-breaking game. A melange of the action, adventure and RPG genres, Square has truly beaten all odds and produced an engaging, seamless epic unlike any other. " - www.gamespot.com - 9.6/10

Features:
* An adventure from the producer of the highly acclaimed Final Fantasy Tactics.

* Amazing use of lighting, texture, and camera angles to create the perfect ambiance of a medieval world.

* The unique Status System allows specific parts of the body to be attacked, bringing more depth and complexity to battle sequences.

* The smooth transition from gameplay to cut scenes, coupled with the game's real-time action, heighten the game's movie-like experience.

* A fully polygonal and richly detailed environment that allows a 3D 360-degree view of the world.

* A gripping and suspenseful storyline that unfolds in a series of dialogue balloons similar to that of classic comic books.
Release date NZ
June 28th, 2000
Publisher
Square Enix
Product ID
1455419