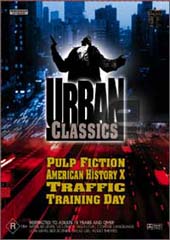 Call them modern day westerns, call them portraits of urban decay, call them masterpieces of their time- each one of these films is a searing, sometimes funny, sometimes shocking portrait of the urban experience.

With subject matter ranging from the drug wars to police corruption to right wing extremists, these are the motion pictures that define an era.

The 1994 Cannes Film Festival Best Picture winner and winner of the Best Screenplay at the 1994 Academy Awards Pulp Fiction has topped many Top 10 lists since its release. Quentin Tarantino's de­finitive motion picture achievement to date delivers an unforgettable cast of characters including a pair of low-rent hit men; their boss's sexy and wilful wife; a desperate prize fighter; and the most outrageous pair of armed robbers to ever pack a rod – in a wild mixture of explosive action and wickedly funny humour!

Hes got one day to prove himself and hes a little anxious. He should be. Today is going to be the toughest of his life. Jake Hoyt (Ethan Hawke) has been assigned to Detective Alonzo Harris (Denzel Washington), the head of an elite narcotics team and hes got about 8 hours to prove his worth to him. Fresh faced and idealistic, Hoyt is keen to make an impression but it is Harris that will be doing all the impressing. After 13 years on the streets, Harris walks a blurred line between right and wrong. When he pushes Hoyt into trailing some of the drugs they have just seized, Hoyt discovers that the law according to Harris is not the same one he has been taught to uphold.

Intertwining vignettes frame this tale of America's esca­lating War on Drugs. Ohio Supreme Court judge Robert Wakefield has been appointed the nation's Drug Czar, his new position made more daunting by the discovery that his teenage daughter Caroline is a heroin addict. Meanwhile, DEA agents Montel Gordon and Ray Castro are pursuing Helena Ayala, wife of jailed kingpin Carlos Ayala, as she seeks to the control the business that her husband had kept hidden from her. South of the Border, duplicious local constable Javier Rodriguez is fighting the battle with his own jaded, questionable ethical code.

Derek Vinyard wasnt born a racist, but he learnt quickly how to become one. Seeking retribution for his fathers murder and burning for a way to vent his rage, Derek (Oscar nominee, Edward Norton) turned into the charismatic skinhead leader of a local white power movement. From theft and assault, Dereks violent actions escalated into all-out-war, culminating in the brutal murder of two teenagers. In his eyes, race-hate justice had been dealt. Now after three years in prison everyone awaits Dereks return; his gang, his violent girlfriend and his greatest fan, his brother, Danny (Edward Furlong). But what they are about to encounter is a man who no longer views hatred as a badge of honour. Ashamed of his past, Derek is in a race to save Danny and his family from the violence hes brought down upon them.