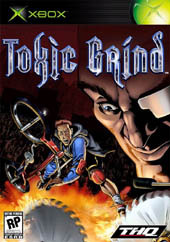 Due to COVID-19, we're unable to accept orders for non-essentials items at this time. Learn more...
Developed by Blue Shift, Toxic Grind is a mission-based game set in a dark futuristic world where BMX riding is forbidden and punishable by death. As time traveling Jason Hayes, the player and other rogue riders are injected with a deadly poison by the maniacal game show host, Dixon Von Blass. With poison in their veins, Hayes and the other riders are forced to compete as contestants on a show where death equals ratings. The doomed riders must complete objectives, avoid deadly obstacles and pull off insane tricks in order to survive the most lethal game show ever created.

Toxic Grind features 14 diverse worlds, each with different themes set to locations of the past, present and future. Areas include a futuristic New York City, the ancient Roman Coliseum and the mysterious Bourbon Street of New Orleans. A dynamic playfield enables gamers to contend with ramps, moving platforms and grind rails that change shape or rotate to expose hidden areas.