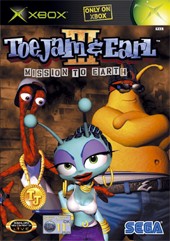 Due to COVID-19, we're unable to accept orders for non-essentials items at this time. Learn more...
The original alien duo is back in a hilarious new adventure. In ToeJam & Earl III: Mission to Earth, ToeJam, Big Earl, and their sassy new homegirl, Latisha embark on a mission to retrieve the 12 sacred Albums of Funk, stolen by the dysfunctional inhabitants of the planet Earth. Gamers will explore sprawling environments as they master the ways of Funk-Fu and battle towards the ultimate showdown with the evil Anti-Funk. Along the way, they'll collect present power-ups of almost endless variety and take on harrowing side quests in a massive, wickedly funny adventure. Play solo or with a friend; the dynamically splitting screen makes it easy for a friend to jump in at any time and double-team the clueless Earthlings in style. Either way, gamers are guaranteed an irreverent blend of action, risqu?comedy and out-of-this-world alien attitude.