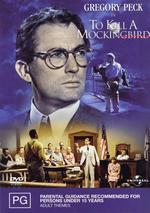 A truely classic film. Loved that it hasnt been interferred with – true to the book… If you ever wanted to get the feel of the story – this portrayal has done just that.. The characters are as I imagined them all those years ago when I first read the book… Loved scout too… Totally innocent and realistic… A great movie for any collection..

Really enjoyed reading the book when I was at school and the film is every bit as good as the book. Gregory Peck's character is wonderful, what a lovely father. Scout is really good as well.

Gregory Peck won an Oscar for his brilliant performance as the Southern lawyer who defends a black man accused of rape in this film version of the Pulitzer Prize-winning novel. The way in which it captures a time, a place, and above all a mood, makes this film a masterpiece. The setting is a dusty Southern town during the Depression. A white woman accuses a black man of rape. Though he is obviously innocent, the outcome of his trial is such a foregone conclusion that no lawyer will step forward to defend him--except Peck, the town's most distinguished citizen. His compassionate defense costs him many friendships but earns him the respect and admiration of his two motherless children.

"To Kill a Mockingbird is quite simply one of the finest family-oriented dramas ever made. A beautiful and deeply affecting adaptation of the Pulitzer Prize-winning novel by Harper Lee, the film retains a timeless quality that transcends its historically dated subject matter (racism in the Depression-era South) and remains powerfully resonant in present-day America with its advocacy of tolerance, justice, integrity, and loving, responsible parenthood. It's tempting to call this an important "message" movie that should be required viewing for children and adults alike, but this riveting courtroom drama is anything but stodgy or pedantic. As Atticus Finch, the small-town Alabama lawyer and widower father of two, Gregory Peck gives one of his finest performances with his impassioned defense of a black man (Brock Peters) wrongfully accused of the rape and assault of a young white woman. While his children, Scout (Mary Badham) and Jem (Philip Alford), learn the realities of racial prejudice and irrational hatred, they also learn to overcome their fear of the unknown as personified by their mysterious, mostly unseen neighbor Boo Radley (Robert Duvall, in his brilliant, almost completely nonverbal screen debut). What emerges from this evocative, exquisitely filmed drama is a pure distillation of the themes of Harper Lee's enduring novel, a showcase for some of the finest American acting ever assembled in one film, and a rare quality of humanitarian artistry (including Horton Foote's splendid screenplay and Elmer Bernstein's outstanding score) that seems all but lost in the chaotic morass of modern cinema."--Jeff Shannon