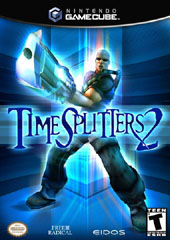 Due to COVID-19, we're unable to accept orders for non-essentials items at this time. Learn more...
TimeSplitters 2 is adrenalized adventure through time to save mankind’s future from the grasp of an evil race seeking to end it all. Operating in periods of past and future history, the TimeSplitters have hidden crystal shards that power a time portal device which allows them to travel through time and corrupt mankind’s fate.

The only way to stop the TimeSplitters evil plot is to pursue them into the portal and recover the nine crystals before they are lost forever. In control of a space marines that has infiltrated the TimeSplitters ship teetering on the edge of space and time, leap into the unknown, track down the crystal and eliminate the TimeSplitters with as much prejudice as you can muster!