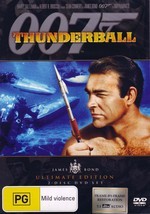 Look Up! Look Down! Look Out! Here Comes The Biggest Bond Of All!

Bond is kept busy battling bloodthirsty sharks, both in the water and at Nassau casinos, while he tracks a hijacked NATO aircraft and its two missing atomic bombs. What he finds is an explosion of romance when he meets up with the lovely and voluptuous Domino.

Throughout this popular and entertaining film, director Terence Young superbly balances 007's comic wit and a sophisticated charm against the sinister danger threatened by SPECTRE's own Number Two, Emilio Largo. Young is aided by the talent of master cameraman Lamar Boren whose stunning underwater photography creates an atmosphere both eerie and enchanting.