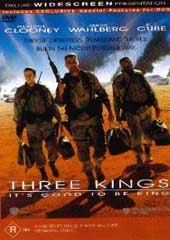 Fantastic film. Remembered seeing it way back in the day and was stoked to pick up this copy. Great acting from young George Clooney and Mark Wahlberg and a ‘fun’ performance from Ice Cube.

I've been going through a state of watching war movies (trying to appease the boyfriend and watch more manly movies). This was a different type of movie and it was very good! Different and enjoyable. Recommended.

George Clooney, Ice Cube and Mark Wahlberg star as three soldiers stationed in the gulf at the end of the struggle. Now they have the opportunity of a lifetime, to become three kings when they find a map to a fortune in stolen Kuwaiti gold.

They must fight their enemies and their own fear as they are tossed into the middle of a dramatic uprising in the middle of the city that proves the war is far from over.