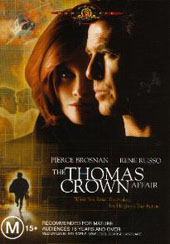 Thomas Crown is a self-made billionaire who can buy anything he wants and is irresistible to women. But there are some things that money cant buy.

Thomas Crown has run out of challenges. When an alarm sounds at a world class museum and someone walks out with a priceless Monet, Crown is the last person the New York police suspect. But one person suspects him: Catherine Banning, the brilliant female investigator hired to retrieve the painting no matter what it takes. Catherine loves the chase as much as he does and shes on to his game. Crown has found his challenge. Two can play, but only one can win.