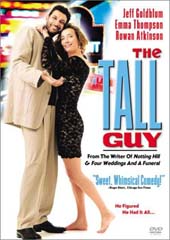 Due to COVID-19, we're unable to accept orders for non-essentials items at this time. Learn more...
From Richard Curtis, writer of Notting Hill and Four Weddings And A Funeral, The Tall Guy is a sharply funny story punctuated by the likeable comic chemistry of Jeff Goldblum and Emma Thompson. Awkward and out-of-place, Dexter (Goldblum) is a hard-luck American actor struggling to get by on the theatrical stages of London. His dreary personal life, however, gets a much-needed shot in the arm when he meets a pretty nurse (Thompson) during one of his many visits to the local clinic! Together they find love... but when your life is like Dexter's, it's hard to know a good thing when you get it! With a scene-stealing performance by Rowan Atkinson and a stellar cast, The Tall Guy is smart, charming and hilarious.
Release date NZ
October 23rd, 2003
Movie Format
DVD Region
Edition
Language
English
Length (Minutes)
92
Stars
Studio
MGM
Genre
Original Release Year
1988
UPC
9321337035802
Product ID
1460889