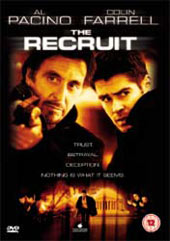 The Recruit is a twist-filled mind game thriller set in the world of U.S. secret agents. Walter Burke (Al Pacino) recruits computer whizz James Clayton (Colin Farrell) to be part of his training course for CIA field operatives based in “the Farm”, a training school at the CIA's home in Langley. While there, Clayton falls in love with fellow trainee Layla (Bridget Moynahan) but Burke later informs Clayton she's a double agent..