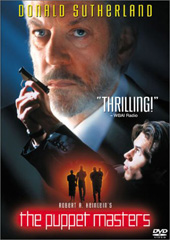 Donald Sutherland leads a team of top-level government agents who make a chilling discovery: extraterrestrial beings have landed and are quickly taking control of the residents of a small midwestern town – manipulating their bodies and minds like puppets! Faced with an escalating crisis as the creatures multiply and spread, the team must somehow eliminate the seemingly unstoppable aliens. With riveting special effects and heart-stopping action, “The Puppet Masters” is sure to thrill you!