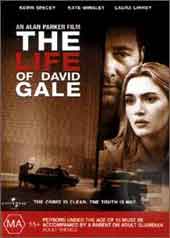 Unavailable
Sorry, this product is not currently available to order
The Life of David Gale is a powerful thriller from Alan Parker. David Gale (Kevin Spacey), a leading death penalty opponent finds himself on death row for the rape and murder of fellow activist Constance Harraway (Laura Linney). With only three days before his scheduled execution, Gale agrees to give reporter Elizabeth "Bitsey" Bloom (Kate Winslet) an exclusive interview. But Bitsey soon realises that this assignment is more than she bargained for, and that a man's life is in her hands. Putting her own safety in jeopardy, she frantically races to piece together the shocking events surrounding the murder before it's too late. Special Features:
Release date NZ
October 28th, 2003
Movie Format
DVD Region
Edition
Aspect Ratio
Director
Alan Parker
Language
English
Length (Minutes)
130
Stars
Studio
Universal Pictures
Subtitles
English - HI
Supported Audio
Box Dimensions (mm)
135x190x14
UPC
5050582062533
Product ID
1462028