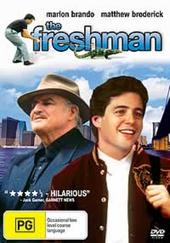 As if trapped in a comic nightmare, Clark finds himself drawn deeper and deeper into an ingenious scam involving an endangered Komodo Dragon, Sabatini's dau­ghter, Bert Parks and a group of very hungry eccentrics. But when the FBI asks Clark to snitch on his colorful employer, he discovers a strange loyalty to this fatherly figure. Written and directed by Andrew Bergman, creator of The Inlaws.