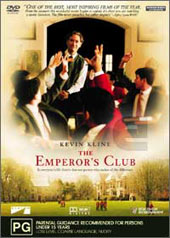 Due to COVID-19, we're unable to accept orders for non-essentials items at this time. Learn more...
Like “Dead Poet’s Society and “Mr.Holland’s Opus” before it, “The Emperor’s Club” is at once inspirational and heartrending, haunting and magnificent – and ultimately unforgettable.

William Hundert (Kevin Kline) a teacher of Greek and Roman History, finds his cloistered world of influence upended by the arrival of a new student. Sedgewick Bell (Emile Hirsch) refuses to cooperate and at every opportunity breaks the rules and undermines Hundert’s authority. This open defiance causes Hundert such conflict, that he decides to tackle the problem in a totally unexpected way – with profound and life changing consequences for both the teacher and his rebellious student.