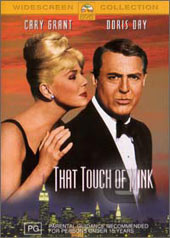 Doris Day is in top form in this comedy/farce. Was a pleasant way to spend an afternoon relaxing and laughing.

That Touch of Mink

Cathy Timberlake (Doris Day) is en route to a job interview when a car transporting businessman Philip Shayne (Cary Grant) covers her in mud. He sends his assistant, Roger (Gig Young), to apologize, but upon meeting Cathy, Roger knows that she would be a suitable match for his boss. Despite their mutual attraction, Cathy and Philip want different things. Philip wants a fling, while Cathy wants a marriage. As they travel to exotic locales, their differing motivations are put to the test.