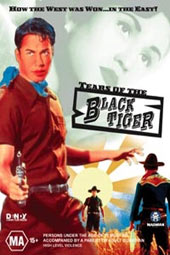 Part Thai folk tale, part action film, and part Western (yes, Western), TEARS OF THE BLACK TIGER is an unabashedly romantic film. When a young country boy (Chartchai Ngamsan) falls in love with a wealthy city girl (Stella Malucchi) fate attempts to keep them apart. Years later, however, they are reunited under very unusual circumstances. Can their love stand the test of time..

Imagine John Ford (The Searchers), Jean-Luc Godard (Weekend), and John Waters (Pink Flamingos) collaborating on an insane 1950s melodrama, drenched in succulent Technicolor--rose-petal reds, turquoise blues, saffron yellows, and Pepto-Bismol pinks--and you're just barely encompassing the cinematic delirium of Tears of the Black Tiger. This fever dream of a movie features rival gunslingers, a poor farmboy and the daughter of a wealthy landowner, a murdered father, bloody revenge, a forced marriage, and a half-dozen other cliches stitched into a preposterous yet weirdly engaging story. But the story isn't the point; director Wisit Sasanatieng takes every opportunity to dive into a different style or device, ranging from delicate shots of a lovely girl in a mint-green gazebo to spewing gore and full-on battle with machine guns and grenade-launchers. The sets are often blatantly theatrical, the lighting exaggerated, and the acting ranges from wooden to maniacal. In short, this Thai movie is like nothing you've ever seen, born of a deep moviemania and unbridled chutzpah, and you owe it to yourself to watch it. --Bret Fetzer