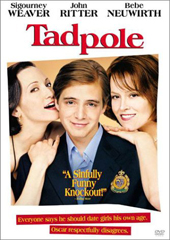 He's suave, smart, cultured and has one thing on his mind: older women! But be careful what you wish for, Oscar! When a sexy 40-something friend of the family (Neuwirth) actually takes Oscar up on his infatuation, he suddenly finds himself in way over his head! Winner of the Director's Award and nominated for the Grand Jury Prize at the Sundance Film Festival-you won't believe how the sophisticated fun takes off…as the romantic complications pile up!