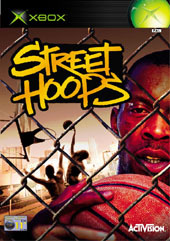 Due to COVID-19, we're unable to accept orders for non-essentials items at this time. Learn more...
Street Hoops is an "in your face" street-style basketball game that captures the aggressive energy and attitude of blacktop competition. The game allows players to compete in a nationwide tournament representing their hometown on the most notorious street courts in the nation. Players will be able to choose from a roster of athletes and performers, including key players that were featured in the And 1 Mix Tapes and Nike's "Freestyle" commercial series.