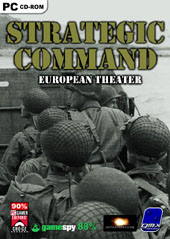 Unavailable
Sorry, this product is not currently available to order
The new improved Strategic Command – European Theatre is WWII Grand Strategy at its best. As the supreme commander of the Axis or Allied forces, the player shapes the fates of the nations at war during the Second World War in Europe. Political options, research and upgrade of equipment, management of supply and resources and the strategic employment of one's armed forces are some of the keys to success. With limited phase restrictions and wide-open turns you are in complete control to try many different approaches and entertain just as many possible outcomes. The future of Europe and perhaps ultimate glory is in your hands. Features: