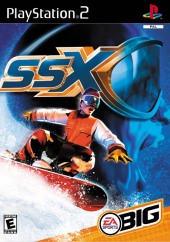 Unavailable
Sorry, this product is not currently available to order
"It's a pretty rare thing when a game comes seemingly out of nowhere and absolutely rocks its platform... Beautiful graphics, huge courses, great multiplayer and infinite replayability round out the package to make this hands-down the best game on the PS2." - www.dailyradar.com - Direct Hit!"

EA SPORTS presents its first original PlayStation 2 console title, SSX. Based on the new extreme sport Boardercross, SSX combines high-speed snowboard racing with insane big air tricks on what is best described as an exaggerated snow covered motocross track. In this knock out style of competition, resplendent with jumps, steep turns, tunnels, and hidden shortcut sections, six racers soar down the hill, but only the first one down wins.

Three different gameplay modes will allow riders to test their skills in a variety of exciting boarding events. Feel like brushing up on some tricks and generally goofing off? Freeride is the way to go. Does a quick competition sound good? Single Event is the answer. World Circuit is the season long fight to the finish. Riders must progress through an array of different events, ultimately leading up to the Championship Invitational Event.