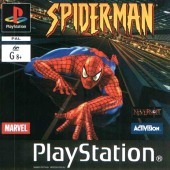 Due to COVID-19, we're unable to accept orders for non-essentials items at this time. Learn more...
Spiderman is the first free roaming, 3D action/adventure game that lets you become a fully equipped Spiderman. You will balance the weight of great power and responsibility as you utilize super strength to fight super villains and thwart their vile plans. Employ all your Spidey skills, including web slinging, crawling up walls, agility and "spidey-sense" to protect the innocent. Eight main comic book locations and 30 sub-levels set the stage for your battles and fun.

* New York in 3D. Everything you love about Spiderman is now yours. Crawl up walls, sling your web, fight, punch and kick in totally free-roaming 3D exploration. Go anywhere - anytime - without limits, including Mannhattan, the New York sewer system and other realistic comic book locales.

* The freaks come out at night. Scorpion, Venom and Rhino are just some of the notorious bosses you'll encounter in your travels - as well as an army of lizard men. Swing into a series if missions to discover info, fight villains and infiltrate laboratories to reveal your enemies' sinister plans.

* Weapons at your fingertips. Employ an arsenal of weapons, including web-projectiles, fluids and sonic devices from a distance. Plus, having the proportionate strength and speed of a man-sized spider doesn't hurt either.