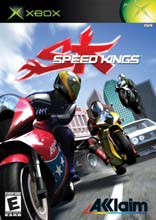 Due to COVID-19, we're unable to accept new orders at this time. Learn more...
It will take nerves of steel and lightning fast reflexes to make your way through these crowded streets. Introducing Speed Kings, the full-on adrenaline rush of street motorcycle racing, right in your living room. It’s a mixture of Burnout meets Road Rash that will have players weaving through traffic, pulling off insane stunts, running from police and racing to the finish line. Do you have what it takes to be a Speed King? Read more for a batch of fresh screens ...