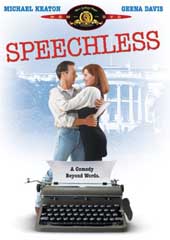 There are two sides to every relationship… Don't trust either of them. Michael Keaton and Geena Davis are a winning duo in this romantic comedy that proves that opposites can attract. Smart, sexy and side-splittingly funny, Speechless provides great entertainment.

It was a match made in heaven… almost. Two witty, intelligent insomniacs, Kevin (Keaton) and Julia (Davis) meet over the last box of sleeping pills at an all-night convenience store and are immediately attracted.

They share an evening of passion and romance and discover that they have a lot in common… maybe too much. When they learn that they're both speechwriters – but for opposing political compaigns – the sweethearts quickly move from speechless to ruthless and drop the pillow talk for serious verbal jabbing. But the more they stab each other in the back and insult each other directly, the more they realise that true love doesn't follow along party lines.