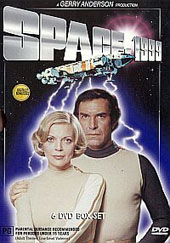 When I first saw this on the web site, I must admit I only bought it because it was cheap, but wow, I had forgotten what a great series space 1999 was, there are a few boring episodes, but for $40.00 and to own such a great classic is great, I only hope they continue releasing other series onto DVD. I do remember now this was one of the greatest science fiction series ever made up with Doctor Who and Blake's 7, but still for the price it's well worth owning, I look forward to future releases of later series.

When Earth's moon is blasted out of orbit by a series of spectacular nuclear explosions the greatest adventure mankind has ever known begins for 311 men and women on Moonbase Alpha. Each episode is a fight for survival encountering bizarre life forms, unfathomed civilizations, hostile enviroments and mystic phenomena.