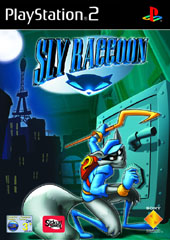 Unavailable
Sorry, this product is not currently available to order
Sly Raccoon is a vibrantly animated caper starring the charming and wry, charismatic thief, Sly Raccoon. Born into a family of the world's greatest thieves, Sly is given, on his eighth birthday, the Thievius Raccoonus, a family heirloom that is passed down from generation to generation containing all of their best-kept secrets and thieving techniques around. Later that evening, a gang of ruthless villains broke into his harmonious home. As Sly watched, the intruders overpowered his father, as they stole the Thievius Raccoonus splitting it ways and each taking a piece of this legacy with them.

Ten years later, Sly is out to steal the Thievius Raccoonus back and reclaim what is rightfully his. . He enlists the help of his gadget genius pal Bentley, and his big eager friend Murray, and the trio embark on a quest to restore honor to his family's name