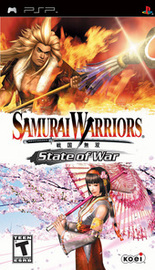 Unavailable
Sorry, this product is not currently available to order
Samurai Warriors: State of War for PSP is a tactical action game set in the turbulent times of civil war Japan. Players will get to take control of famous military commanders and other legendary characters, and engage in a multitude of battles in a dramatically unfolding war.

From the thrill of carving your way through a flood of enemy soldiers to the stunning dramatic scenes, all the best-loved features from the acclaimed PS2 version make their triumphant return. And with the inclusion of new features such as the Battlefield Area System, which adds new strategic gameplay ideal for portable gaming, and full screen action, this is everything fans of the game could wish for in their pocket.