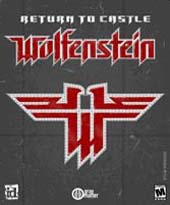 Day One Delivery: Pre-order from GameZone Online and you could get day one delivery. We will be making special shipping arrangements to get RTC Wolfenstein shipped out the day before the NZ release so you can get the game the day it hits the stores! This applies to most towns and cities through-out the country. For rural deliveries, please allow an extra day.

Rebate offer: Pre-order Wolfenstein and get a $10 rebate voucher with the game. Just fill it in, return it and you will receive a $10.00 cheque back in the mail.

In addition to an action-packed story-driven single-player experience where players must infiltrate deep into the heart of the Third Reich, Return to Castle Wolfenstein’s multiplayer mode enlists gamers to hone their tactical skills in a series of combat scenarios. Gamers will join the fight as an axis or ally soldier and be challenged to intense, realistic campaigns like storming beachheads, infiltrating military installations, holding strategic positions, and more. The game features multiple objectives spanning a variety of maps, including an Axis airbase, a war-torn German village and a secret Nazi laboratory.

“The Wolfenstein universe is rife with possibilities for truly incredible gamplay,” states Todd Hollenshead, CEO, id Software. “By working closely with Gray Matter and Nerve, we can simultaneously develop rich, fully-realized single and multiplayer experiences. Gamers are going to be blown away.”

Packed with realistic team-based multiplayer gameplay, Return to Castle Wolfenstein features four different character classes –- soldier, engineer, medic and lieutenant. Each class has unique attributes and the ability to access different ammunition and equipment that compliments their style of warfare.