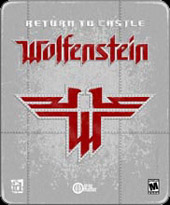 The heart-stopping follow-up to one of the most revered PC games of all time, Return To Castle Wolfenstein uncovers Hitler's horrific obsession with the occult, living dead and genetic mutations. As B.J. Blaskowicz, you'll infiltrate deep into the twisted bowels of the Third Reich to battle the horrific super-soldiers, zombies and mutants forged in the unearthly experiments of Heinrich Himmler.

In the ninth century A.D., the pre-Christian Saxon prince Heinrich sought to forge an independent Germanic state, separate from the powerful Frankish dynasty. Having discovered and translated the ancient texts from the East, he became convinced that his people were the direct descendants of Thule, a race of pure consciousness. He believed that he could tap into the power of Thule. Indeed he did, rising up a vast army of the evil undead, led by Dark Knights, whom he anointed in bizarre, dark rituals. Though the power of Thule had not been intended for evil, Heinrich harnessed it with sheer will, bending the power against all who would oppose him.

Legend suggests that in 943 A.D. a mysterious and powerful monk finally stood against Heinrich and his army of Dark Knights. Following a fierce and bloody battle this lone monk enshrined Heinrich in a living tomb at the top of a remote mountain peak. Knowing that evil of this kind cannot be destroyed - only contained - he marked and sealed the ground with the curses of the ancient texts forbidding any human ever to enter the tomb.

The rise of fascism in Germany in the twentieth century brought with it a fascination with the occult. Under direct orders to achieve world domination at all costs, Hitler's henchmen sought unorthodox measures to gain the upper hand on the Allies. Some worked on chemical weapons, others on the jet engine, still others on long-range missiles. But Hitler's lead henchman, head of the SS, Heinrich Himmler took the most drastic measures of all.

Over time, Himmler became convinced that he could raise Heinrich from the dead, and in doing so, would then possess the power to command an army of the undead against the Allies. He began methodically researching how to approach the dark ritual, throwing scores of scientists, great cashes of wealth, and the full power of the Nazi war machine behind his effort. Month after month, he got closer and closer. By 1943, many of the pieces were in place including the all-important locating of Heinrich's grave.

September, 1943 - Himmler has found the tomb and is in possession of the ancient texts. They are looking for a serum - in a hidden grave - which they plan to use to create their modern day Dark Knights. Our intelligence suggests that Himmler has not yet succeeded, but the following reports of occult experimentation and genetic mutation indicate that he is close, very close.

You are B.J. Blazkowicz, a bad-ass Army Ranger recruited into the Office of Secret Actions (OSA) tasked with escaping and then returning to Castle Wolfenstein in an attempt to thwart Heinrich Himmler's occult and genetic experiments. Himmler believes himself to be a reincarnation of a 10th century dark prince, Henry the Fowler, also known as Heinrich. Through genetic engineering and the harnessing of occult powers, Himmler hopes to raise an unstoppable army to level the Allies once and for all.

You must first escape from imprisonment in the castle to report the strange creatures and happenings in and around Wolfenstein to the OSA. Your mission takes a drastic turn as you learn the depth of Himmler's plans and what you must do to defeat the evil he has unleashed.

This is what you have been trained for. Your surroundings will be dangerous and hostile. We are currently tracking activities believed to be associated with Himmler in locations throughout Germany including; villages overrun by the occult, hidden crypts, forests, air bases, secret weapons facilities, and genetic labs, to name only the few we are aware of. There are more, and you must find them.