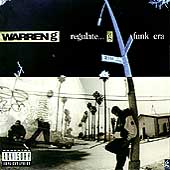 Portraying their grim view of street life with aloof bravado, Warren G and Nate Dogg announce a new brand of stylin' with “This Is The Shack,” a pleading reggae-scented groove, and “Regulate,” in which a sweet R&B style of accompaniment confronts the gangstas on the dance floor.

While raunchy skits such as “Gangsta Sermon” and “‘94 Ho Draft” bring the church and ESPN cheek to cheek with the boys’ locker room, taut arrangements such as “Do You See” and “Recognize” depict adolescent rites of passage and day-to-day challenges of the street. Then just when you think you've got his G-Funk thang down, “What's Next” opens with a nursery rhyme, then launches into a bass-heavy new mix style, even as “And Ya Don't Stop” brings traditional blues elements to play inside a Latin-flavored groove.