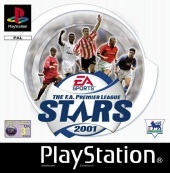 Using the critically acclaimed STARS points system the user can take advantage of their talents on the pitch with the chance to win STARS. These STARS can then be converted into points that can be allocated to players to increase any one of a number of skills including shooting, passing and pace.

‘The F.A. Premier League STARS 2001’ now features ‘STARS Challenges’ with increased opportunities to win STARS by performing spectacular feats on the pitch, and therefore improve the team. Most exciting of all, the game features a brand new ‘STARS Stakes’ system which will enable the user to play against an opponent whilst wagering their players on the outcome of the game – just imagine losing David Beckham to your Manchester City supporting mate!

Features:
· STARS Stakes - play against your friends and add to the drama of playing for stakes. Wager your best players on the outcome of matches in the ultimate test of YOUR talent.
· STARS Challenges – more opportunities to win STARS by performing spectacular
skills on the pitch.
· Bigger Squads - manage a squad of 22 players and totally control their on and off pitch
development.
· New Transfer Market - transfer market includes world class STARS available to purchase.
· Ball Curling - fire in amazing free kicks.
· Improved Shooting System – send in rocket shots from all over the pitch.
· Intelligent Player Switching - improved AI to give the user control of the most appropriate player to intercept the ball.
· New time of day and weather features - day will turn to night and a clear sky will cloud over and rain.
· 3D crowd - stadiums are brought to life with 3D animating crowds. (PC Version only)
· F.A Premier League Licence - the only officially licensed product that can give you the English F.A. Premier League.
· Commentary from Richard Keys, Andy Gray, Martin Tyler and Clive Tyldesley.
Release date NZ
September 21st, 2000
Publisher
EA Sports
Product ID
1455594