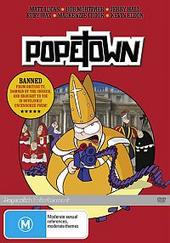 Welcome to the star-studded and very irreverent world of Popetown. Heres where youll find a cartoon pope, superstar voices, the hottest animators in town and a script that will make you fall off your pew with laughter.

Imagine Father Ted meets South Park. Youve never seen anything like it.Office politics exist in any workplace, but in Popetown theres a bizarre twist : the company is the Vatican and the Chief Executive happens to be the Pope.The long-suffering Father Nicholas runs the back-office at Popetown, a job that includes anything from ordering Fridays frozen fish fingers to planning prestigious public masses. Each day he struggles against the insane and chaotic bureaucracy of Popetown.

He is so much a part of the fabric of Popetown that he can no longer see just how bizarre the others are : the sinister, corrupt and mysteriously wealthy Cardinals; the fame-obsessed TV reporter Sister Penelope ; the 77 year-old eccentric Pope with all the charm of an obnoxious seven-year-old (who likes Father Nicholoas so much that he takes baths with him); and Sister Marie, Father Nicholas devoted and innocent assistant, who all too often acts before, or even without, thinking.