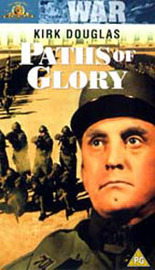 this film is one of the many staples theat show stanley kubrick as a master film maker, each shot is beautiful, each line is perfectly delivered, this film is so very moving, it is perfect. stanley kubrick said that he thought it was not an pro or anti war film it was…just in between, but it shows that war is hell. three men durring the first world war are wrongfully acused of cowardisum. possible the most moving moment in this film is when stanley kubricks, soon to be wife sings infornt of monstorius soldiers, after the cheers and hoots they begin to sing and cry with her, possible the greatest ever war film and another lasting memory of the great film maker