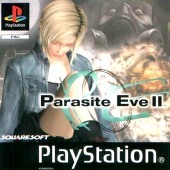 Due to COVID-19, we're unable to accept orders for non-essentials items at this time. Learn more...
The sequel to the PlayStation Greatest Hits titles Parasite Eve, with its new graphics engine and optimized real-time battle system, this action epic is sure to become another amazing RPG.

The customizability of the game has been retained with realistic weapons enhancements that can give weapons new and improved capabilities. In addition to awesome firepower, Aya's "Parasite Energy" enables her to harness the power of the elements to combat her new adversaries.

With the enhanced graphics engine rendering every detail, the game's backgrounds and characters are brought to life in shocking detail.