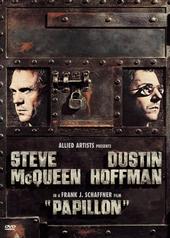 An innocent man is deported to a French Penal colony. He attempted many escapes, endured years in solitary for it that would break lesser men and even escaped from Devil's Island which was considered impossible. Dustin Hoffman outshone Steve McQueen, but altogether a memorable film that has stood the test of time. Interesting window on justice in 1930s-40s France. Based on Henri Charierre's au­tobiography that I read on release in 1970.

I have always loved this movie! I think it is one of both Steve McQueen's and Dustin Hoffman's best acting performances in their careers. Amazing to watch what a man can go through and remain human.