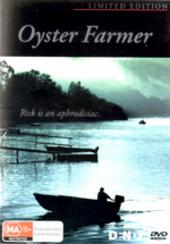 Unavailable
Sorry, this product is not currently available to order
Risk is an aphrodisiac.

23 year old Jack Flange (Alex O’Lachlan), moves from Sydney to a small oyster-farming community to work for Brownie (David Field) and his old man Mumbles (Jim Norton), one of the founding families of the river who are now almost bankrupt.

Jack has moved to the river to be closer to his sister Nikki who is recovering from a car accident in a private hospital nearby. In a desperate bid to find money for her hospital bills, Jack robs the Sydney Fish Markets and posts the proceeds to himself upriver where he waits for the package to arrive.

When the package doesn’t come he begins to investigate those around him and in the process he lies, he steals and he falls in love. A battle is fought over a bathtub, a marriage is saved, and nothing will ever be the same again.