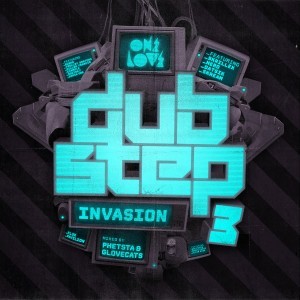 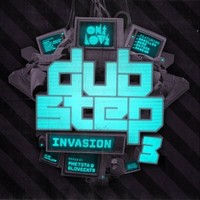 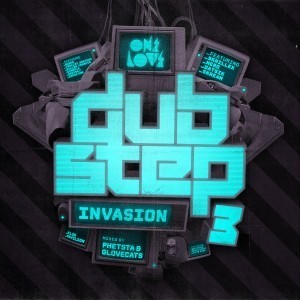 Dubstep is everywhere and continues its global domination with artists such as Skrillex and Nero selling out arenas across all continents.

Onelove Recordings were the first to bring you an all Australian originated, compiled and mixed compilation of the hottest in the genre around world right now and return once more to unleash another monster to the hungry masses; Dubstep Invasion 3 – the third installment of the hugely successful series & the biggest album to date. Pumped full of 45 fierce sub sonic hits & gritty dubstep anthems that have dominated from the underground rave caves to the world stage, Dubstep Invasion 3 is the definitive guide, mixed expertly over 2 discs by Australian bass champions Phetsta & Glovecats. Rammed with the biggest & latest from Flux Pavillion, Example, Foreign Beggars, Skrillex, Datsik, Nero, Matrix & Futurebound, Sub Focus, Caspa & more.

Disc 1 sees scene leaders & Sydney Dubstep duo, Glovecats, return for their third appearance on the series with an inexplicable blend of enthusiasm, musical appreciation, knowledge and a forward thinking approach to the sound, Glovecats have firmly established themselves as one of the genres most dynamic & popular outfits, smashing out Disc 2 is the WA producer Phetsta, offering both the latest from himself & his global peers. Phetsta has quickly carved his own sound across both the Drum & Bass Dubstep scenes, via early support from BBC Radio 1.