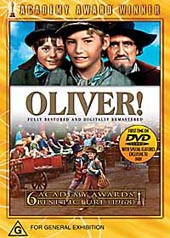 Great version of Oliver – brings back memories of going to watch it at the movies as a child. The songs and caliber of acting are awesome.

In this award-winning adaptation of the Broadway musical based on the Charles Dickens novel, 9-year-old orphan Oliver Twist (Mark Lester) falls in with a group of street-urchin pickpockets led by the Artful Dodger (Jack Wild) and masterminded by the criminal Fagin (Ron Moody). When Oliver's intended mark, Mr. Brownlow (Joseph O'Conor), takes pity on the lad and offers him a home, Fagin's henchman Bill Sikes (Oliver Reed) plots to kidnap the boy to keep him from talking.