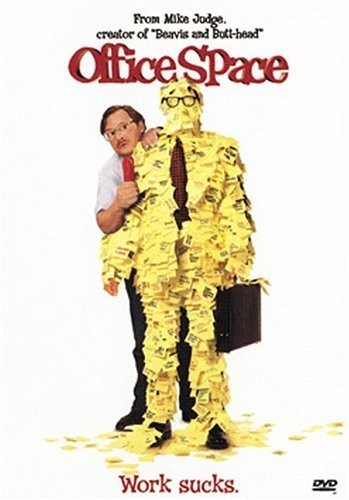 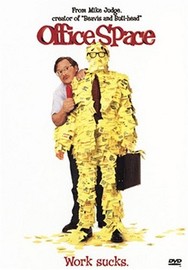 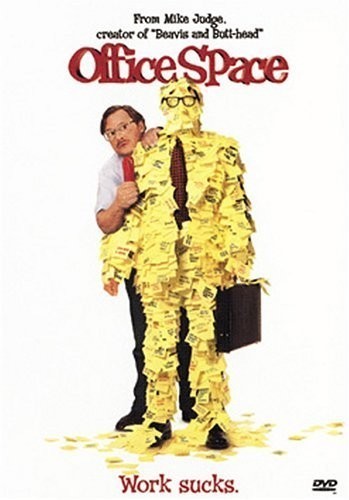 I thoroughly enjoyed this film with its original story and some great comedy.

I first saw this years ago, but had to buy it on DVD to see it again and again. If your job has you stuck in cubicle-land, working for a boss you don't like, with weird co-workers, you will be able to relate to this!

Peter Gibbons (played by Ron Livingstone, from Band of Brothers) has reached a point where the daily memo's and sheer stupidity of his boss drives him up the wall, and when they start firing people who actually do the work, but promote him to management, he hatches a plan to get back at the company.

The premise is simple, but watching this makes me want to try the same thing at work, just to see if I can get promoted by telling the truth and being lazy!

Jennifer Aniston has a small role as his new girlfriend, but if you want to see this just becuase she is in it, you may be disappointed.

A great little feel-good movie; a personal favourite of mine – 5 stars! :)

Three white-collar workers (Ron Livingston, David Herman and Ajay Naidu) go through their days full of anger, angst, disgust and annoyance because of their jobs.

They all hate supervisor Gary Cole, but soon Livingston unintentionally gets hypnotized into taking charge of his life. Of course that means shaking things up at work (with his two friends taking his lead) and starting to date a beautiful restaurant waitress (“Friends” standout Jennifer Aniston). But what happens when the trio gets a little too smart and conniving for their own good? “Office Space” really plays more like an adult cartoon than a live-action presentation for the masses.

There are still some excellent things here, but honestly if you miss work to see “Office Space” you probably deserve to be fired. I suggest you either buy it from GPstore (because it's cheap) or rent it. It's sure to make for a memorable night.