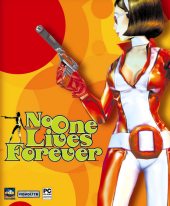 Unavailable
Sorry, this product is not currently available to order
Reviews:
5 stars out of 5 for COMPUTER GAMES magazine.

"One of the best PC games of the year." PC GAMER

"Just when it seemed as if first-person shooters had run out of ideas, along comes No One Lives Forever to reinvigorate the genre. Two years after the release of Half-Life, a first-person shooter has finally arrived that's so stylish, so ingenious, so well written, so well acted, and otherwise so great that this review won't have to include the expression "it's no Half-Life" - except for right there. No One Lives Forever takes the impressive enemy artificial intelligence of Half-Life, the stealth features of Thief: The Dark Project, and the gadgetry of the console shooter GoldenEye 007 and then combines them all with a unique, colorful '60s setting and a great sense of humor. The resulting game's unrelenting inventiveness shows in virtually every aspect of its design... The fact is that Monolith Productions has finally delivered an undeniably superlative action game." - GameSpot - 9.3/10

"Groovy chicks, lots of action, and a snappy sense of humour make this one of the best PC games of the year... We don't normally condone explosive man/goat love here at Daily Radar, but for games like this, we are willing to make an exception. No One Lives Forever is so imaginative, colorful and funny that it serves to remind us how insufferably gloomy and witless most shooters are..." - www.dailyradar.com - Direct Hit!

"Pigs are flying, hell is frozen, and Monolith has produced one of the best shooters of the year!... No One Lives Forever (NOLF) combines a first-rate plot, grandiose explosions, superb dialogue, and plenty of trigger-happy action to make for one of the best gaming experiences we've had all year. " - pc.ign.com - 9.1/10

The Game:
No One Lives Forever is a story-driven, first person adventure delivering over-the-top action, tense subterfuge, outrageous villians and wry humour in the tradition of 1960s spy-films and TV shows.

Combining a submersive storyline, next generation technology and intense action, an exciting espionage adventure, set in the rich,colourful world of the 1960s is created.

THE WORLD IS NOT ENOUGH! - Hours of gameplay in exciting locales around the world such as Morocco, Germany, England, the French Alps, the Caribbean and even a secret Russian Space Station!