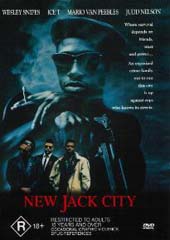 Where survival depends on friends, trust and power…An organized crime family out to run this city is up against cops who know its streets. Nino Brown is an American success story, an entrepreneur who's found the ultimate cash crop: crack.

Nino thinks he's untouchable but he's wrong: a handful of street-smart cops are determined t to bring him down.