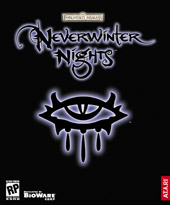 
Neverwinter Nights is a new Advanced Dungeons & Dragons roleplaying game from BioWare, the developers of Baldur\'s Gate. Neverwinter Nights has not only been designed specifically for the online, multiplayer environment and the latest in 3D technology but it also allows you to experience all the magic of pen-and-paper Dungeon-Mastering on your home computer. Using Neverwinter Nights\' powerful and user-friendly Solstice Toolset, you can create and populate entire new modular worlds and stories for others to adventure in. Even better, enter a multiplayer module as a Dungeon Master (DM) and you can alter the plot, possess characters, and manage combat from behind the scenes, all in real-time.

While Neverwinter Nights is a multiplayer online game, this is not the same as a massively multiplayer, persistent online world such as Ultima Online or EverQuest.

Neverwinter Nights has modeled its gameplay on the rich experience of pen-and-paper roleplaying: a small group of adventurers huddling around a table as their Dungeon Master weaves them into a tale of suspense, intrigue, and great daring.

With this goal in mind, Bioware has chosen to tell the Neverwinter Nights story through a series of self-contained, tightly crafted modules, each of them representing an evening\'s play. These modules are not linked into a linear chain, like beads along a string. Instead, they have been grouped into four clusters or \'environments.\' Within each environment, you are free to play whichever modules you want, whenever you want, and in whatever order. If a bunch of friends are getting together to play \'The Bloodsail Conspiracy\' module, go join them. Or if you\'ve been wanting to try the \'Of Sons and Fathers\' module instead, give it a shot.

Neither module is required to complete the story but each will give you different insights into the plot and may have an impact on how charactersrespond to you later in the game. Once you have completed enough modules within the environment, a special Hub Module will become available to you. This Hub Module serves as a portal between environments and completing it opens up a new cluster of modules for you to choose from.

Many people believe that multiplayer gaming and a strong focus on story exist at opposite ends of a spectrum. Yet Neverwinter Nights features a recurring cast of complex and memorable characters in an epic story that\'s rich with hopes, deceptions, and trials of faith. At the same time, our entire tale has been built from the ground up to provide an unsurpassable multiplayer experience. In Neverwinter, you get the best of both possible worlds.
Release date NZ
June 28th, 2002
Game Platform
Brand
Media Format
PC DVD-ROM
Publisher
Infogrames
Product ID
1457431