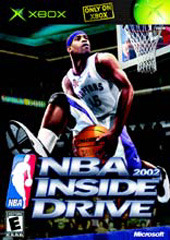 Due to COVID-19, we're unable to accept new orders at this time. Learn more...
NBA Inside Drive combines NBA end-to-end action with the high-flying acrobatic dunks of Vince Carter and all of the NBA's stars. Stunning graphics put you on all of the NBA arena floors and pits you along side all of your favorite NBA players. Inside Drive is one-touch passing and shooting, combined with the pace and action of real NBA basketball challenges you to bring your best game — both offensively and defensively. So whether you're trying to break Vince down off of the dribble and taking it to the rack, or trying to guide your favorite team to the NBA Finals, NBA Inside Drive 2002 takes basketball gaming to a new level!