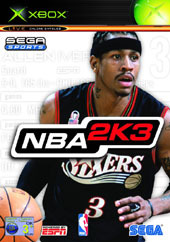 Unavailable
Sorry, this product is no longer available to order
SEGA Sports NBA 2K3 powers forward with the kind of improvement that only results from an off-season dedicated to perfection. Imagine jump shots so real players actually adjust their movement in mid-air based on distance from the hoop and defensive pressure, a passing touch that gives you the control to skirt a defender or start a fast break, and dribble moves that let you jab left, rock right, crossover, spin and much more. It’s all here in NBA 2K3.

No other game delivers the physical element of basketball like this. Accurate impact from collisions, especially hard fouls and authoritative dunks, shot blocking with emphasis on precise hand-to-ball contact, and the ability to lunge for the loose ball, even if it means ending up on some celebrity’s lap.

With commentators that analyze strategy, cut scenes portraying lifelike player interaction, uniforms that move like real fabric and a brand new ESPN broadcast system that wraps it all together, NBA 2K3 provides the complete and advanced NBA experience.

Exciting Low Post Game – Fronting, faking, pivoting and facing up actions, and a total control drop step you can use to change direction mid-move.

Controlled Rebounding Game – Effectively block out opponents for a better shot at grabbing a board.

Improved Street Mode – Take any NBA player from any team outside for some playground action with detailed environments, animated crowds and variable weather conditions.

Enhanced Arena Environments – Animated crowds, mascots, and assistants. Coaches, music, chants and effects such as trainer scuffs on the floor.

Unique AI Slider Controls give you the power to truly customize your game.