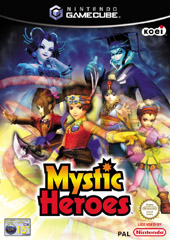 Due to COVID-19, we're unable to accept orders for non-essentials items at this time. Learn more...
Mystic Heroes is a game in the continuing saga of good vs. evil, pitting the protagonists against impossible odds in a quest to save not just themselves, but the entire land. In this action game you must battle through masses of enemies, cooperate with your allies, and use various mystic attacks that are powered by runes. But beware; brawn alone will not lead to victory.