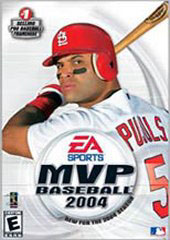 Fielders pull off some huge catches, and the crowd response in this game has to be heard to be believed, it's the best crowd noise I've ever heard in a game.

When pitching, there is a meter that comes up similar to golf games so you have full control over the pitch which is great.

I cant really think of a more exciting sports game than this one, and I really cannot stop playing it.

Step up to the plate and master the true art of hitting with MVP Baseball 2004. An all-new hitting model allows for complete user control over all swing types as well as signature cuts from the game's best sluggers. Featuring rich new presentation, realistic player models, enhanced animations, and an immersive audio experience, MVP Baseball 2004 takes you out to the ballgame like never before. Manage contract negotiations, build your team with expanded trade options, and train your club to be the best in a deep new EA SPORTS Dynasty Mode. When you're ready to take your game online, connect to EA SPORTS Nation for the first time ever for matchup gameplay, tournaments, downloadable content, and more. Baseball is the ultimate game of skill and technique, and the pursuit to becoming the five-tool player begins with mastering the art of hitting in MVP Baseball 2004.